The Nuragic Civilization developed during the Middle Bronze Age (1600 b.C.) and it lasted until Carthaginians arrived, in VI century B.C. The word “nuragic” comes from the most characteristic monument of Sardinia: the nuraghe. There are about 7000 nuraghes, a great number if we think that the isle is about 24000 km2. We have no written evidence of this civilization but archeologists give us a well-detailed idea of their way of life, based on their exploitation of mineral resources. The nuragic society was composed of builders, shepherds, farmers, fishermen and metallurgists, but in the area of Tempio Pausania the primary source of economy was breeding animals. They also had a good knowledge of the sea, testified by the discovery of about seventy votive small vessels made of bronze. These ships show a great originality compared to those of the rest of the Mediterranean. In this region, as well as in other parts of Sardinia, there are two kinds of nuraghe: the tholos ones are truncated-cone shaped towers with a circular chamber and corbelled ceiling; the other ones are called corridor nuraghes and they lean on a big rock which becomes itself part of the building. 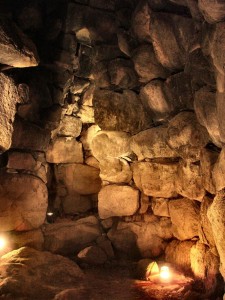 This construction is characteried by massive walls exploited only minimally,with smaller spaces within. This is the reason why they appear squatter compared to the elegance and monumentality of the tholos ones.All the nuraghes contained a wooden terrace which was the most functional part of the building and where dwellings could be erected. In this area there are twenty two archaeological sites; one of the best preserved is the Nuraghe Majori, object of recent archeological excavations. It lies on a granite dome at the altitude of 498 meters above sea level, in a strategic position which allowed it to control the surrounding territory, along with many nuraghes arranged in the nearby hills: Lu Polcu, Budas, Izzana, Naracheddu, Naraconi, Monti di Deu, Agnu e Bonvicinu.

The area is covered by a thick wood of cork-trees, holm-trees, durmasts, ashes and alders. The undergrowth is composed of strawberry-trees, heather and butcher’s broom. The Nuraghe Majori has got a sub-circular shape and is made of large and wide stones, laid without grout (dry walls). The entrance faces east-south-east to protect the building from the Mistral and to make a better use of sunlight. It can be considered a mixed nuraghe, because it shows the features of both corridor and tholos. 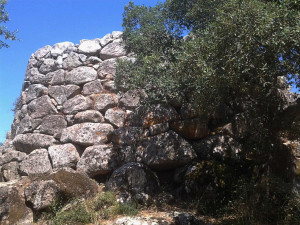 Into the left chamber there is a breeding colony of small bats that arrive in April, give birth in June and migrate in October. The Rhinolophus hipposideros or Lesser horseshoe bat is one of the world’s smallest bats weighing only 5 to 9 grams, with a wingspan of 22m and a body length of 6 cm. Its fur is light grey in colour at the base and darker on the upper body. (Use of flash not allowed. Access in small groups only. Please keep quiet while visiting the cave).

The corridor leads directly to a semi-circular yard. Here we find a a narrow flight that leads upstairs, to the remains of another tholos chamber which includes a silo, used to preserve food. From the top there’s a scenic view of Mount Limbara to the south-east and the village of Aggius to the north-west. During the excavations, nuragic materials have been found which date back to the Middle Bronze Age (XV-X century B.C.), such as saucepans, pottery and cups. The monument has also been used during the Middle Age. The Nuraghe Majori had a village around, where daily life took place. The stone huts had a roof usually made of trunks and branches; unfortunately the area hasn’t been affected yet by archeological excavations.

Balares created a nature trail, equipped with information about the plants, that takes the visitor through the scents and colours of the wood and the Mediterranean scrub. Just a strong passion for the sardinian cultural patrimony has been supporting the commitment of Balares, whose only revenue derives from the tickets.